EXPERIENCE PASSES PLAN YOUR TRIP FEATURED VIDEOS
« Back to Spotlights

Top 10 Ways to Enjoy the Hudson River in Dutchess

The impressive Hudson River is actually a tidal estuary, an arm of the sea where salty sea water meets fresh water running off the land. Native tribes named the river Mahicantuck which loosely means “river that flows two ways.” In 1664 the river was given the name of Henry Hudson, an Englishman who had captained a Dutch ship in 1609 in search of the fabled Northwest Passage. It is the defining natural feature of a major region of New York State and millions have admired its grandeur. (Source: Dept. of Environmental Conservation) Make sure you do too, in Dutchess County!

1. Charter a Boat or Take a Cruise

Sailing in the Hudson Valley is some of the most beautiful river sailing in the world. In Dutchess County, there are so many sites to see from the Hudson River, such as historical homes, the Culinary Institute of America, Marist College, and the cities of Poughkeepsie and Beacon. Not to mention towering views of towering mountains, breathtaking vistas and local wildlife. Charter a vessel or hop aboard a tour or cruise with Tivoli Sailing Company or Nothing But Time Sailing Charters in Poughkeepsie.

A very special ship calls the Hudson River home. Sloop Clearwater is the late folk music legend and environmental activist Pete Seeger’s dream become reality. Seeger, along with many other concerned individuals, believed that a majestic replica of the sloops that sailed the Hudson in the 18th and 19th centuries would bring people to the river where they could experience its beauty and be moved to preserve it, and she was launched on her maiden voyage in 1969. Purchase tickets from Hudson River Sloop Clearwater, Inc. for one of their public sails which give those aboard a chance to hoist the sails to the rhythm of a traditional sea chanty, steer the boat with the 11-foot tiller, relax and learn about the river’s history, biology and environmental concerns, and much more!

Did you know there are five points along the river in Dutchess that offer a Hudson kayaking experience? Beginning in the southern part of the county, visit Scenic Hudson’s Long Dock Park in Beacon where paddleboard, single kayak and tandem kayak rentals are available through Hudson River Expeditions. Heading north, check out the kayak launch at Quiet Cove Riverfront Park in Poughkeepsie with tours provided by Hudson River Recreation. Experience sweeping views of the Hudson Highlands from a unique vantage point on the River. 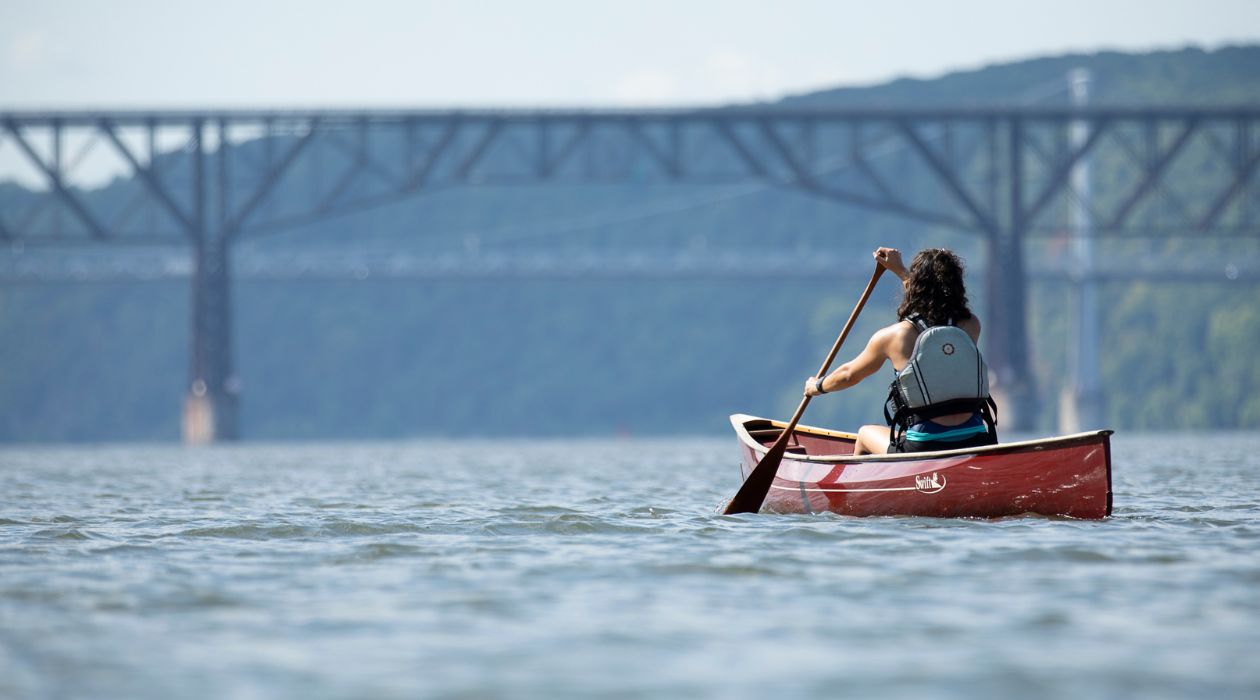 Next, head to the Hyde Park Landing Marina to The River Connection Boathouse to tour the shoreline of the Home of Franklin D. Roosevelt National Historic Site and Vanderbilt Mansion National Historic Site via kayak. You won’t want to miss a visit to Margaret Lewis Norrie State Park, adjacent to Mills Mansion at Staatsburgh State Historic Site. Here's a tip: after working up a sweat on the water, head to nearby Black Snake Brewing Company in Staatsburg to cool off with a fresh pint.

Related: Your Guide to Craft Breweries in Dutchess County

In addition, The Norrie Boat Basin has a public kayak launch. The Atlantic Kayak Tours offers the Norrie Short tour from Norrie Point Paddlesport Center—a great option for families, as the tour is available for kids 12 and up. Last but not least, paddle Tivoli Bays for a quiet and private kayaking trip through beautiful marshlands.

A tiny jewel of the Hudson Highlands State Park Preserve, Pollepel is now familiarly known as Bannerman Island. Francis Bannerman, a Scottish munitions dealer who ran a successful business in Brooklyn, purchased the island in 1900 and the following year began construction on a simulated castle to store his wares and a simple summer residence for his family. Mrs. Helen Bannerman, a successful gardener, enhanced the paths and terraces with wonderful flowers and shrubs, some of which still exist today. The Bannerman Castle Trust hosts a slew of events on the island, including movie nights, chef's dinners and performances of live theater. Book in advance for a 30-minute boat ride to and from the island – departing from the Beacon Institute Floating Dock – and a 1.5 hour guided tour of all things Bannerman.

5. Stroll Across the Walkway Over the Hudson

The bridge now known as the Walkway Over the Hudson opened in 1889 as the Poughkeepsie-Highland Railroad Bridge – at the time of its opening it was the longest bridge in the world. In 1974, a fire that was likely started by a spark from a train’s brakes destroyed the tracks. In 2009 the Walkway Over the Hudson State Historic Park re-opened as the longest, elevated pedestrian bridge in the world and it’s the perfect spot to view the majestic Hudson River. Want another vantage point? Take the 21-story, ADA-compliant, glass elevator from the Poughkeepsie waterfront up to the bridge. Plus, a wheelchair-accessible electric tram means everyone can experience this world-class view!

Enjoy “the river that flows two ways” from your table or the outdoor bar at Shadows on the Hudson in Poughkeepsie. Perched on a 40-foot cliff above the Hudson and just 50 feet from its eastern bank, this award-winning steak and seafood restaurant offers one-of-a-kind, grand views of the Mid-Hudson Bridge to the north and miles of open river to the south. Flores Taqueria offers another gorgeous spot for riverside dining. At the historic Ice House—an artifact of the 1800s ice harvesting industry on the Hudson—Flores Taqueria serves up creative tacos, empanadas, salads, cocktails and more!

Zeus Brewing Co. in Poughkeepsie has an absolutely breathtaking view of the Hudson River from its rooftop bar. Try their selection of beers crafted from locally sourced ingredients, alongside cocktails served in fun pouches. Plus, be sure to snack on their delicious pizzas, pastas and other elevated brewery fare. To make a reservation for the roof, click here.

The Hudson River and Poughkeepsie were once known for wildly cheering crowds, brightly colored pennants, the crack of a starting gun, and the rumble of a grandstand train. For decades Poughkeepsie was famous for the excitement and the glory of the Poughkeepsie Regatta, and we are starting to see some of the old magic return. Marist College has developed a highly successful crew program. Both the men's and women's teams have won several MAAC Championships and are becoming well known internationally. Vassar College’s men’s and women’s teams are also active on the Hudson. The Hudson River Rowing Association along with the Mid-Hudson Rowing Association host the Poughkeepsie Regatta, a head-style series of races each September.

Take in the river from a seat on the train. Metro-North Railroad’s Hudson Line runs north from New York City along the east shore of the Hudson. At Poughkeepsie, switch to Amtrak’s Empire Corridor trains to continue north. Choose a window seat for unique views of the Newburgh-Beacon Bridge, Bannerman Island, Mid-Hudson Bridge, Walkway Over the Hudson and more. For additional information, click here.