A Huge Milestone for the Walkway

Ten years ago, Walkway Over the Hudson State Historic Park opened its gates to the public for the first time.  In the decade since, more than five million people from all 50 states and over 50 countries have taken in our amazing Hudson Valley views. 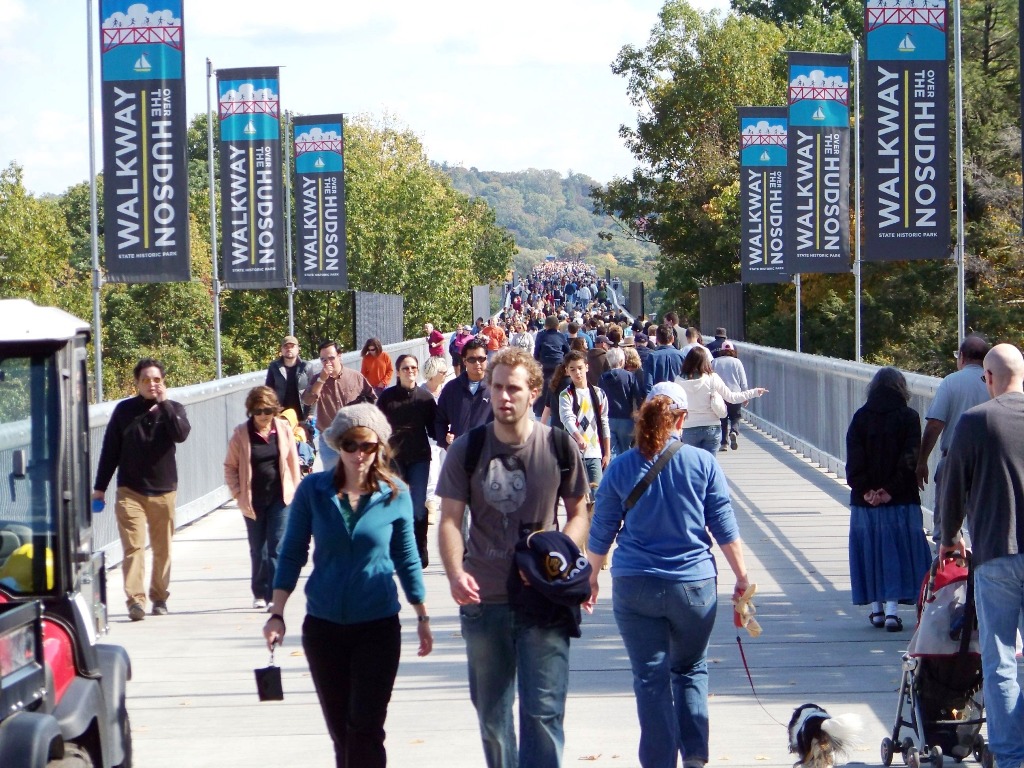 The Walkway has been the backdrop for marriage proposals, the venue for fundraisers that have helped local nonprofits raise over $8 million, the host of one-of-a-kind events, an economic driver in the region, and The Great Connector between not only Poughkeepsie and Highland, but also friends, families, and communities.

Read more about how the Walkway has spurred change and improved the region in this article by John Barry of the Poughkeepsie Journal.

A Trip Down Memory Lane

Opening Day in 2009 – On October 3, 2009 the Walkway Over the Hudson held its Opening Day, welcoming nearly 25,000 people for their first trek across the World’s longest elevated pedestrian bridge.

Setting a Guinness World Record in 2012 – A record was set when 2,569 people from across the region came together to dance the Hokey Pokey, creating the longest dance line in history.

Fourth of July Firework Spectacular – At a position of 212 feet above the Hudson River, the Walkway has become one of the most magnificent places in the nation to watch Fourth of July fireworks.

Addition of Welcome Centers on both sides of the river – In 2018 and 2019 Welcome Centers were opened on both approaches, featuring indoor restrooms, community gathering spaces, information and more.

Walkway Ambassadors – The Walkway’s roster of volunteer Ambassadors has frown to over 180. This dedicated group embodies why it is the Friendliest Park in the World.

What's Next on the Walkway

East Gate Plaza – Plans for an expanded deck just outside the Poughkeepsie gate with a merchandise pavilion, covered gathering area, increased seating and much more.

Light the Walkway – Improving lighting on the deck of the Walkway will enhance safety and security and improve after-dark events.

Accessibility and Sustainability – The Walkway wanted everyone in the world to see the incredible panoramic views. This means improving access for those with mobility issues and sustaining what’s already been built during the first ten years.

“I was pleasantly surprised with how beautiful the Walkway was – amazing views, easy parking, and very friendly crowds. I wish I could live as close to something so unique and historical, but I can’t wait to visit again!” – Melissa, New Jersey

"I grew up in the area –​ coming back to walk the bridge gave me a whole new perspective on the beauty of the Hudson Valley! It's also a great way to get some exercise while taking in the amazing views." – John, Massachusetts

Thank you to Walkway Over the Hudson for providing the content for this Spotlight.

To learn more about upcoming events on the Walkway, click here!